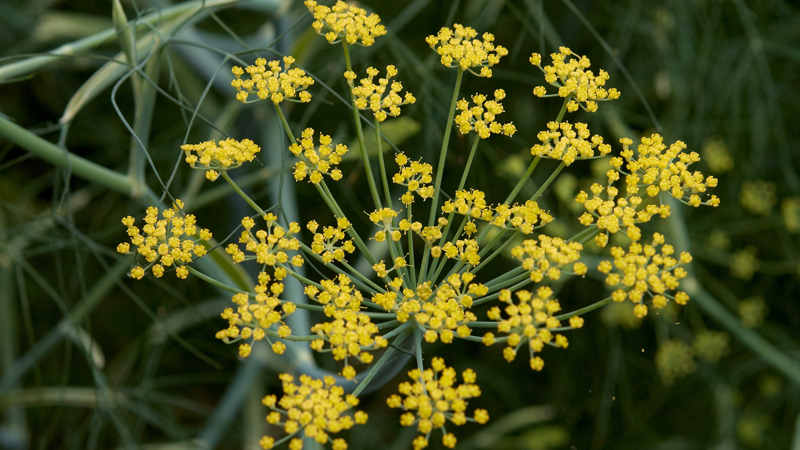 Fennel (Foeniculum vulgare) is a tall, highly aromatic biennial or perennial herb belonging to the Apiaceae (or Umbelliferae) family which is also known as the carrot, celery or parsley family. It can grow up to 2.5 metres high and has hollow stems, feathery leaves that can be up to 40cm long, and flat-topped clusters (umbels) of tiny golden-yellow flowers.

The herb is native to the Mediterranean but is now widely naturalised in many regions throughout the world, where it is often found growing wild in pastures, along roadsides, riverbanks, and by the coast.

Fennel has been used as a medicinal herb since ancient times. It was prized by the Greeks and Romans who used it for cooking, as a medicine and for repelling insects. Ancient physicians such as Hippocrates, Pliny and Dioscorides recommended for it a variety of complaints, including digestive problems, cramps, infant colic and for increasing milk flow in nursing mothers. Roman soldiers drank fennel tea prior to battle to instil courage and strength and chewed on the seeds during long marches to reduce hunger pangs.

Pliny stated that snakes rubbed against the plant to help restore their sight. It has since been used in eye washes and compresses for itchy, irritated eyes and for improving the sight, and is still current in the British Pharmacopoeia for conjunctivitis and blepharitis.

17th century herbalist Culpepper said ‘Fennel increases milk, cleanses the eyes from mists that hinder sight and takes away the loathings which oftentimes happens to the stomachs of sick persons’. He also recommended it for ‘those that are grown fat’.

Many of the old herbals say that Fennel was an antidote to ‘all manner of venom’ including snake bites, poisonous plants and mushrooms, and it was also hung on doors to protect against witchcraft and evil spirits.

Today the plant is widely cultivated for use in cooking and for flavouring foods and drinks. It is used in sweet and savoury recipes and is particularly popular in Italian, Indian and Middle Eastern dishes. The aromatic, mild-aniseed flavoured seeds of sweet fennel are the more commonly available variety, however bitter fennel seeds are used in Central and Eastern European dishes. These have a more bitter taste which is similar to celery seed. Florence fennel has a broad, bulbous base which can be eaten raw in salads or cooked as a vegetable.

Fennel seeds are one of the key ingredients in the Chinese Five Spice mix and the Indian Five Spice, Panch Phoron. They are also used in herbal teas and capsules as a digestive aid. In India and Pakistan roasted seeds are traditionally eaten after a meal to aid digestion and to freshen the breath.

The seeds are also used in chai tea and liquors such as absinthe and akvavit.

Fennel essential oil has a wide range of uses in aromatherapy and can also be found in pharmaceutical products such as cough lozenges, carminatives and laxatives.

Sweet Fennel essential oil is steam distilled from the crushed, dried seeds of sweet fennel (also known as Roman fennel or French fennel). It is pale yellow in colour and has a fresh, earthy, sweet aniseed aroma.

An essential oil can also be obtained from bitter fennel, also known as common fennel. This is not widely used in aromatherapy as it can cause sensitisation in some people.

It is thought that Fennel contains a plant hormone – a form of oestrogen which makes it especially useful for the female reproductive system. It is used to help regulate the menstrual cycle particularly where periods are painful and scanty. It can also help relieve PMT/PMS symptoms such as cramps, bloating and water retention, as well as symptoms of the menopause caused by fluctuating hormones. Fennel is thought to stimulate the production of oestrogen by the adrenal glands once the ovaries have stopped working. Another hormonal effect is the oil’s ability to increase milk flow in breast-feeding mothers.

Fennel can help to relieve hiccoughs, bloating, indigestion, colic, constipation, wind, inflammation, and nausea. It can act as an appetite normaliser and suppressant – making it useful for both anorexia and weight loss.

The oil has a tonic effect on the kidneys, liver and spleen and helps to decongest the lymphatic system. It stimulates the release of excess fluids and toxins which can be helpful for conditions such as cellulite, arthritis, rheumatism, gout and oedema, and can help support the rehabilitation of those addicted to drugs or alcohol. As a diuretic and urinary tract antiseptic it is also useful for cystitis, other urinary tract infections, urine retention and kidney stones.

Fennel should not be used with children under 6 due to active constituent Melanthine. Do not use during pregnancy or if epileptic.

Use after heavy meal if bloated, uncomfortable/constipated. Massage into the tummy with a clockwise rotation to help relieve wind and to stimulate digestion.

Alternatively, diffuse 3 drops each of Fennel, Lime, Peppermint and Spearmint after your meal.

If you feel in need of a detox after overindulging mix 1 drop Fennel, 2 drops Juniperberry and 3 drops Grapefruit in 15ml of carrier oil and use for massage. Alternatively use the same oils in an aromatherapy diffuser

Arthritis Massage Gel (for when joint inflammation is hot or sore)